This stage launches with a new logo on the fattest prog to date (a 44-pager), and then ends with the special event prog 900: the first prog to feature just a single story with the Dredd/Fr1day crossover Casualties of War.

Meanwhile, in Megazine-land, Anderson continues her gap year around the galaxy and Trevor Hairsine provides memorable art for Harmony Krieg. 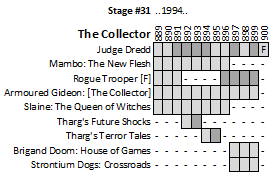 Judge Dredd
In the '94 Sci-Fi Special, Mark Millar comes up with an amusing conceit whereby Mr Bennet Joins The Judges, but then has Dredd murder him in cold blood. Creative cruelty.

Meanwhile, Wagner returns to the prog with The Time Machine (a comedy of errors featuring a bumbling set of time-traveling Cambridge academics), Conspiracy Of Silence (see below), A Guide To Mega-Speak and the 28-page Fr1day crossover Casualties of War.

Conspiracy Of Silence is an important piece of canon that moves forward several plot strands about McGruder going insane, a nascent conspiracy to remove her and a secretive second Mechanismo program. It segues into the Meg's The Tenth Planet, itself a precursor to Wilderlands.

Wagner and Abnett are back with more in the next stage...

Mambo: The New Flesh *NEW THRILL*
Cybercop Rachel Verlaine investigates a corporate conspiracy (after an encounter with the droogs from A Clockwork Orange and a chat with her dad, who just happens to be a head in a jar). It's a cyber-punk body horror!
Returns in 1995 with Fleshworld...

Rogue Trooper [Fr1day]
So, try to keep up:

Anyway: Steve White (with Henry Flint on art duties) takes the new chipped-up Fr1day out for a spin in the 1994 Sci-Fi Special's Some Mother's Son, an action-soaked frying pan-to-fire tale heavy on the FWOOOM! but light on a dramatic question (or a location).

In the prog: Mercy Killing let's us know for the first time since Apocalypse Dreadnought that we're now on Nu-Earth (which I don't think has ever been part of the Fr1day reboot until now). Despite lots of shouting "skev", a shit-ton of military jargon and some great action sequences the problem is outlined in the credit page of the first episode: that Fr1day and the chips "pursue an uncertain destiny". The Norts have been replaced with religious fanatics (the Kervanu) and the Southers with just anyone else we meet. It's like the perfect recipe for churning out story after story without really committing to anything - almost as if the purpose of the comic is just to endlessly repeat itself to generate money.

Mercenary Attitudes introduces the oft-repeated concept of "knifing", except with guns. Also, a super-ninja babe joins forces and exposits all over the place about the Clavell/Clavel Corporation before dusting off into space. Isn't that just like super-ninja babes, though? Wait: is that still the plot? How many times do we need to kill this Clavell/Clavel guy? It's almost as if the purpose of the comic is just to endlessly repeat itself to generate money.

Apart from the prog 900 Dredd crossover there's more requests to urgently knife in the next stage. It's almost as if...

Armoured Gideon [The Collector]
Frank Weitz is dreaming of the good life when Bill Savage blows his door open with his trusty shoota: "Cock-a-doodle bleedin' do!" Thus begins the mother of all crossovers, making Mills' attempts to insert a T-Rex dynasty into every aspect of 2000 AD pale into insignificance.

The backstory is that Armoured Gideon has been chasing and attempting to eliminate Bill Savage (and Blackhawk, Sam Slade, the Neon Knights, Abelard Snazz, the Harlem Heroes & the Helltrekkers) but is being foiled by The Collector, who is "rescuing" them.

Returns in 1995, minus the crossover cast. Harry Angel, meanwhile, becomes a darling of Al Ewing and returns in the 40th Anniversary Special prog of 2017 in Z.O.M.B.O. as Zombo Prime. Actually, quite a few of these characters return in some form or another: Bill Savage in the aptly titled Savage, Blackhawk reimagined as Aquila, Sam Slade (& his niece), The V.C.s, Harry Twenty (briefly), Max Normal, Ant Wars (sort of) and Ace Trucking.

Slaine: Queen of Witches
Quantum Salmon Leap, episode two. Slaine, mortally wounded by Elfric/Alia at the end of Demon Killer, is rescued by Boudica/Danu's hair and gets to continue his fight against the Roman invasion of Britain. Amusingly, a Roman standard bearer is depicted having to march along beside the testudo formation: brave guy, doomed. History will tell you that the Romans are ultimately victorious, so Slaine and Ukko time tunnel it back to their own time.
Slaine's back for more mystical blood-letting and deific rumpy pumpy in 1995's The Name of the Sword...

Brigand Doom: House of Games
The '85 Sci-Fi Special had Undead Social Justice Warrior (aka Brigand Doom) take down The Beggar King: a low-life entrepreneur who'd made himself The Godfather of Grime (as in mucky living and behavior, not the modern music genre). In House of Games, Inspector Nine continues to pose and pout around her apartment while Doom (looking dapper but smelling danker) helps her root out rampant government corruption.
Personal Hygiene of Doom returns in the next Yearbook...

Strontium Dogs: Crossroads
Gronko (First Bloods) & Ferals team up with Bullmoose, there's news that the S/D agency is back up and running and Durham Red's being hunted by agents of the Gothking. We've switched over from Ennis to Peter Hogan, so the plot is being updated to his world (or galactic) view. Red and Feral meet for the first time and he shows her his warp spasm.
Serves as a precursor to a short Red three-parter next stage, and more Dogs-labeled yarns in '95...