"2.50 sees another surge" (Bishop 2020), and serves as a mid-volume re-launch and jump-on as the page count goes up (44pp to 52pp), we get a new logo and even a free skin transfer! It is a strong launch, with a Dredd featuring then Cadet Giant, follow-up adventures for Shimura & Missionary Man, highlights of Anderson's backpacking trip around (interplanetary) Europe and the gauche goings-on of the Creep. Postcards from the edge, indeed.

If there's a weakness it might be the sense that we're walking through a student art exhibit that lacks careful curation. The worst offender is probably Postcards, as it stretches the character out in ways that seem incongruous, failing to gel well with what came either before or after. It's like some of the old hands have disappeared up their own ashrams in a form of mid-90s homage to the Beatles' transcendental meditation phase. Blend that with new-starts finding their feet (Shimura, Missionary Man & Harmony), and some things that don't stick well to walls (Brute, Creep & O'Rork), and you end up with quite a challenging, but certainly interesting, read.

Progenitor prog 2000 AD, meanwhile, struggles through perhaps its lowest ebb, gets all metaphysical and tries out an experimental 3-Prog Mini-Series. 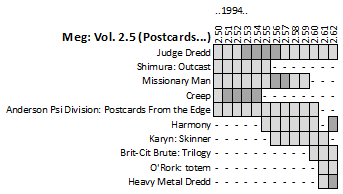 Howler proved controversial in its time because McMahon had the temerity to have changed his art style significantly to something more abstract than people remembered from the big-booted Dredd era or Slaine's glorious sky chariots. Plot: the titular alien howls: and must be stopped, for 36 pages.

The Tenth Planet is a bit of a historical oddity, positing the notion of Hestia, the tenth planet of the solar system that hadn't been noticed hiding behind the sun - and isn't mentioned prior to this story or afterwards. McGruder arrests Dredd and then takes him and some Mechanismos on vacation to Hestia, which is populated mainly by deadly, hostile fauna. It's Death Planet meets Dredd!

The Hestia safari seques into the Wilderlands prog/meg crossover...

Shimura: Outcast
Shimura has turned ronin in order to take on the yakuza without needing to negotiate deep-rooted departmental corruption. Inaba is brought in (but shamed in the process) to investigate. There's a desperate bleakness here, with the heroes up against organized crime, corrupt Judges and underworld demons. Even when they succeed, they seem also to lose.
After this, we get a lot of sporadic one-offs: the next one arrives in Meg 2.72, in the next stage...

Missionary Man
Bad Moon Rising is a poetic and disturbing monster mash in which Preacher Cain goes up against what seems to be a genuine devil: a horned monster that takes a gila-munja pack in thrall and sets out to do evil.

The '94 Mega-Special's The Undertaker Cometh adds to the mystical, mythical qualities of the strip with another supernatural-seeming villain: The Undertaker (who throws down a challenge for Preacher Cain).

Season Of The Witch is a haunting redemption story in some ways reminiscent of High Plains Drifter. Sanctuary is perhaps more straightforward, where a wounded Cain is cornered by a violent gang.

The '95 Yearbook does a crossover with Judge Dredd in Truegrit, providing the revelation that Marshal Cain has some sort of Cursed Earth jurisdiction that Dredd grudgingly accepts. It's tempting to see Cain here as a precursor of sorts to Cursed Earth Koburn.

More Cain & sidekick in the next stage...

Creep
Creep's Day Out sees Creep creep-out the Dark Judges during Necropolis. True Love is a four-parter in which a psychotic Undercity Judge and Creep fight over the lost Psi-Judge Casey. Fun, if you like psychotic magical bastards fucking everyone over and getting away with it.
I think this is it for Creep, except for a Dredd crossover in Meg 2.70...

Anderson, Psi-Division: Postcards From the Edge
An unusual series in which Anderson has retired from being a Judge and is wandering the galaxy, like, looking for herself, man. Wo-man. And she's sending literal postcards through space. Probably in '94 that didn't seem totally odd. Five artists lend their skills, so it's a bit like an Anderson's Future Tales anthology (with a mid-stream Orlok team-up).
Anderson returns in 2.73, but will she ever return to the Big Meg? Nobody knows...

Harmony *NEW THRILL*
Blood & Snow, with great Trevor Hairsine art, introduces Harmony Krieg of Misery (north of Uranium City, in what was Alaska). She's a rogue, always on the make: but being tracked by bigger bastards. The 1995 JD Yearbook gives us Snow Blind, which suggests that Harmony always wins out in the end, but then Meg 2.62 throws that on its head with Homeward Bound, leaving us on a cliffhanger that makes it look like its curtains for Krieg.
Harmony returns in Meg 2.73...

Karyn: Skinner *NEW THRILL*
Psi-Judge Karyn first turned up in Raptaur (Megs 1.11-1.17), then there was Beautiful Evil (a quick "possessed object" action-thriller) in the '94 Mega-Special, just before this first solo series. Skinner is a serial killer jimp investigation.
Karyn's back in Meg 2.67...

Brit-Cit Brute: Trilogy
Super-heroic Judge Newt takes down super-villainous enemy and opera singer (with special sonic powers) Lucio Borgia. Wait: what are non-ironic superheroes doing in my 2000 AD spin-off comic? I would write to my MP to complain but this happened twenty-six years ago (and MPs are notoriously shit at editing comics because it involves actual work and at least occasionally telling the truth). In part two, the super-villain is a celebrity chef named Quentin Freud. In part three, it's an Elvis impersonator named Elvis Wincebottom (The Shocker Rocker).
Editorial must have realized that non-ironic superheroes and supervillains had sneaked into the comic through the back door and put a stop to these shady shenanigans. This is it for the Brit-Cit Brute (apart from a cameo in a later Calhab Justice, and an off-screen death in a Dredd story). He even had a cape, FFS!

O'Rork *NEW THRILL*
O'Rork is a private eye located in Oz. He solves a case involving a psychotic psychic kid.
Tis a one and done (although for completists there's a text story in the '95 Mega-Special)...