The megazine has re-launch-itis, clearly, and here we get its fourth incarnation as the paper size goes wider:

The relationship between the Meg and the prog (after the tightly-knit crossover of Judgement Day) becomes one of creator influence. While the prog provides a comparatively weak sauce Ennis-Dredd sequence the Meg gets Wagner (of which, more later), and Alan Grant on Anderson. These two experienced heavy hitters provide a strong foundation so that, at times, it's the sister comic that's shining as the progenitor prog struggles.


I'd just like to highlight this bit because I think it tends to get a little overlooked in the history ... there's a fairly extended period in the second half of the nineties where the Meg was streets ahead of the prog in terms of consistency and quality, covering as it does, the arse-end of the Burton/McKenzie years at 2000AD and the thankless period Tomlinson and Bishop spent running down the mountain of horrible inventory they inherited. 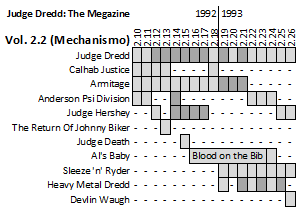 Judge Dredd
With the prog ignoring Judgement Day's aftermath, it's up to the Megazine to provide some post-epic adventures. The Taking of Sector 123 (titularly paying homage to the classic The Taking of Pelham One Two Three from 1974) tells some of the story. With the West Wall having taken a beating during the zombie attack and the Judge force having lost a third of its cohort, Sector 123 has declared independance and its up to Dredd to restore order.

And then Mechanismo stomped into view: a robot Judge force programmed to be as bad-ass as Dredd himself, but with Dredd dead set against the notion from the outset. His predictions come gorily true as the robots prove uncontrollably aggressive. We quickly get a follow-up in Mechanismo Returns, in which Number 5 (an homage to 1986's Short Circuit) reactivates and goes rogue.

Mechanismo stomps back into action in meg 2.37...

Calhab Justice
The result of taking a tartan gift shop on the Royal Mile, Oor Wullie's rhetoric, Judge Dredd's uniform and a box-set of Taggart, throwing them all into a blender and pouring the result onto some newsprint. It's a bit difficult to marry well the conspiracy drama of an impending nuclear apocalypse with someone in a tam o' shanter saying "crivvens".
More Calhab Injustice later in Volume 2...

Armitage
Sci-fi Morse in the nine-part Influential Circles (a mystery massacre with a Royal twist) and the three-part Flashback (which sets up why Drago San and Armitage have the mutual hates, whilst also nabbing a scene from 1987's Lethal Weapon).
We get a second Flashback starting in meg 2.31...

Anderson, Psi-Division
Reasons To Be Cheerful has two parts (not three). The first is a one-off in which Anderson tackles an Undercity vampire, but the second introduces the not subtly monikered Judge Goon and Anderson's growing disillusionment with the Judge system (explored further in the follow-up The Jesus Syndrome). The Witch? Report is a beautiful one-off by Ranson in which some young psi-cadets are taken on an ill-advised Halloween field trip.
Anderson's off to Mars next...

Judge Hershey
It's difficult to get to what makes Hershey a distinct character, and that's not helped by the many-headed hydra of scripters brought in to tell her tales. We had Downtime (2.09) in the previous stage by Dave Stone, now we get The Not-So-Merry Wives Of Windsor by Robbie Morrison (some light froth where Hershey could be any Judge), then Deathsquads by Peter Cornwall (Hershey takes down an SJS vigilante death squad) and Asylum (Morrison again with a supernatural thriller). So there's no sense of narrative continuity to hold onto.
It's Igor Goldkind's turn next with A Game of Dolls...

Judge Death: Tea With Mrs Gunderson
Astounding Dean Ormston art has Mrs Gunderson visit death in containment to get her back rent. Definitely sits in the comic horror section of the overall Death arc.
Death's next solo outing switches back to the prog in 2002 with My Name Is Death...

Al's Baby: Blood on the Bib
A crazy road trip where Al Besteradi and his terrible toddler travel the country on a series of mob assassinations.
Series three crops up in the prog in 1997...

Sleeze 'n' Ryder
A loose Cursed Earth road trip homage to 1969's Easy Rider: expect lava, dinosaurs, muties, deadly droids, forgotten nukes and mayhem.
Tis one series and done (even though it has a "we'll be back" coda).

Devlin Waugh: Brief Encounter
Replete with disposable gloves, this features perhaps the only immigration cavity search scene in any comic I've read, as Devlin tries to slip his pussy through Mega-City customs. No - not like that!
Given such a strong start with Swimming in Blood, it's almost barmy that we end up having to wait until 1999 for the next series (Chasing Herod), although Devlin does crop up in Judge Dredd's Fetish in 1997.