The Megazine of this era struggles with consistency, firing off a barrage of thirteen hit 'n' miss thrills over a ten-issue sequence. But there's gold in them thar hills! Meanwhile, the prog lets loose a spread of attention grabbing meta-structures in the form of Spring Fever, the notorious Summer Offensive and an experimental 2-Prog Mini-Series. 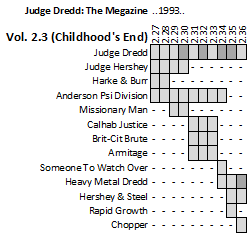 Judge Dredd
Probably the most memorable thing about the Jigsaw Murders is the cover of issue 27, which came with an entirely meta-tastic free jigsaw version. Ladonna Fever was a bit of a "Dredd's Future Shocks" mash-up featuring a Madonna homage. The comedy Hottie House Siege is the famous one-off from this era and is followed up by The Al Capone Story, Bagging The Bagwan, Slick Dickens - Dressed To Kill and Revenge Of The Egghead.
You have permission to get excited again (in a long-form aspect), as in the next stage we get the return of Mechanismo...

Judge Hershey: A Game of Dolls
A disturbing tale of a serial killer preying on costumed prostitutes in a low rent area of the city with a sparse Judge force.
After a brief stint teaming up with Steel (see below) Hershey returns in the next stage...

Harke & Burr: Antique & Curious *NEW THRILL*
Shoe-horned into the Dreddverse, this is about a couple of antique dealers. They seem to be living in Victorian London (given the Cockney accents, horse and carts, gas street lamps and so on), except the blurb says it's a township in The Cursed Earth. Lovejoy meets Dickens (meets Mad Max 3).
More shenanigans from this pair in the next stage...

Anderson, Psi-Division: Childhood's End
Kevin Walker paints Anderson & Orlok's trip to Mars. There's a disaster movie sense about the gang who go in to investigate a strange alien artefact (latterly reminiscent of set-ups like Congo or Prometheus) but aren't really equipped to deal with what they find. Orlok's never been as good since.
Anderson returns in Meg 2.50, but if the series wanted to go out on a high it could've just ended here. Send your rebuttals to ... someone else.


Childhood's End is an interesting one. Despite it being the type of setup I hate (alien origins for humanity), and the whole space exploration thing rather at odds with the kooky galactic adventures we've already seen in the Dreddverse, I still really like this. Walker's epic art is amazing (even Manderson herself), the character stuff is good and it all works really well.

Missionary Man *NEW THRILL*
Gordon Rennie's opening salvo of Salvation At The Last Chance Saloon and A Town Called Intolerance were astounding partly because of the content (a living, breathing Cursed Earth setting borrowing heavily from Westerns) but also in no small part due to the art design from Frank Quitely.
There's lots more Missionary Man to come but in fits and starts and all the artists have a go, which can't help but feel a bit like Picasso couldn't make it.

Brit-Cit Brute *NEW THRILL*
Judge Newt of the SAS dresses like a superhero and strikes poses all over the place and shouts at everyone: like a dystopian Spongebob Squarepants.
Barges its way into a follow-up in '94...

Armitage: Flashback II
An odd sequence in which Armitage plays Snake Plissken, and he has to destroy an evil metal version of the fantasy angel version of Sam Lowry from Brasil.
Returns late in '94...

Chopper: Dead Man's Twist *SET AFTER PAMELA EWING'S DREAM*
Surfing through nightmare canyon to prove himself to ... himself ... again.
Zombie Chopper next shows his grisly visage in the Judge Dredd Poster Prog #4, before surfin' back over to the prog in '95 for Supersmurf 13...