The new Tharg has found himself with a poisoned chalice - on the one hand, he's shed his way into the position of editor of the Galaxy's Greatest Comic, but on the other, there's a drawer full of submissions which his previous incarnation had buried at the very bottom of the pile. Whilst your mileage may vary, there's an argument to be made for this stage marking the comic's nadir (or was that in 1994)? Well, it's a bumpy road, at any rate.

Hope lies in a Hollywood blockbuster version of Judge Dredd, with Sylvester Stallone in the starring role, and we see covers and features playing up to that event as we head towards a combined design relaunch of Tharg's stable of comics (but that's for next stage). I feel safe in avoiding controversy by reviewing the film like this: the city looked great.

As ever with 2000 AD, despite some arguably disappointing storylines, there's a lot of top notch art and design on offer. Dermot Power does a great rendition of Kirk and Picard on the promotional cover of prog 928 (see below), there's Chris Weston's Star Scan of Max Winwood on the back of prog 929, an Arthur Ranson Dredd back of prog 943 and great strip work from the likes of Simon Jacob (Gideon), Henry Flint & Steve Tappin (Fr1day), Dave D'Antiquis (Doom), Paul Johnson (Terror Tales), Nigel Dobbyn & Mark Harrison (Dogs) and Nick Percival (Dredd's Kiss).

Meanwhile, in the big Meg, something wicked this way comes. 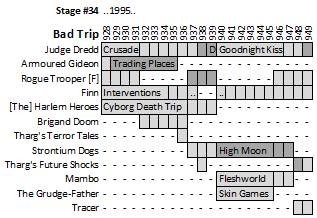 Judge Dredd
Crusade is like Battle Royale on ice, with Judges! Vatican-Cit Judge Cesare has a cape: he's a caped crusader! Mix in Judges from Oz, the Emerald Isle, Brit-Cit, Hondo, East-Meg Two, Luxor, Indo-Cit & Pan-Africa and you've got your high concept all lined up waiting for the axe to fall (and the lava to flow).

Goodnight Kiss is the other long-form Dredd tale this stage, and features Ennis creations Jonni Kiss (superpower: being gorgeous!) and the Brotherhood of Marshals (superpower: capes & kick-assery). Actually, Jonni's big jacket is drawn like a cape as well. What's with all the capes?

In an artistic aside, the Brit-Cit Brute's Judge badge is shown as one of Jonni's victims: suggesting that he was killed off-page at some point. Anyway: they're all ganging up on Dredd because they've got a death wish or something. Dredd is played as too tough to crucify and does that whole Western revenge thing.

Wagner's back full-time in the next stage as Dredd double's down...

Armoured Gideon: Trading Places
Some evil types murder Frank Weitz and then swap his consciousness with that of Armoured Gideon. So, Frank is a giant stompy robot, and AG becomes zombie Frank. Following the rule that more stompy robots is always better, there's also newcomer Armoured Maximilian to contend with before the plot gets down to trying to set things right again (which includes an extended Vietnam sequence).
And that's the final outing for the big stompy robot that likes to eat demons for breakfast. If there was any justice, he'd be back at some point, in the same way that there were resurrected characters of yesteryear during The Collector.

Rogue Trooper [Fr1day]
In Blue On Blue, Fr1day becomes mediator for a potential ceasefire but then ... war breaks out (which is like "war squared" or something), but the big news here is that he then runs into the original gangsta, Mr. Rogue Trooper! Not only that, but the OG's got a gang made up of Venus Bluegenes, and the regened Gunnar, Bagman and Helm. There's never really been any suggestion prior to this that these characters actually exist in the same universe, so (if you're keeping count, and insanely I have been) this is a retcon of a retcon of a retcon of a retcon of a reboot! (There's also a female merc name of Midge that I don't remember, on the side of Fr1day.)

In Mindbombs we strap in for some VR exposition that explains that there are two Nu Earths (thus explaining the two Rogues), but the ending given by The Hit sequence is rewritten here so that we end up with the regened Bagman, Helm & Gunnar (who, in a nod to Blade Runner, have a built-in expiry date).

Ascent throws everyone at the olde Scavenger of Souls satellite, in a bid to stop the digitized personalities being used in an ongoing war. I think we're spoiler safe in here, but the end result is that Rogue, Bagman & Helm suffer permanent death, but Gunnar gets chipped into Rogue's gun, which is then gifted to Fr1day. It's like a future war version of Eastenders. Oi! Fr1day! Let's knoif!

Returns in the very first issue of the next stage...

Finn: Interventions
I wasn't really paying attention to the setting of Finn as being near future (despite it being a spin-off of Third World War), but the intro here lays it out as being set in 2005, where the UK is a presidency and there's an open civil war in ... Plymouth. Taking up almost the entire stage, this is a mighty book at 120 pages of Finn and his machine pistol vs. swathes of militarized security forces and the odd Shining One. Never less than interesting, this also features Eve from Third World War as a reporter.

Like a sort of pagan 007, Finn snogs and shags his way through every female he meets: Mandy the lying witch, Trisha the sadistic nympho-cop and then Eve (who protests a desire for fidelity but then can't resist his machismo). Make of all that what you will.

[The] Harlem Heroes: Cyborg Death Trip
Definite drawer fodder, this crops up almost exactly three years after the previous side story from the softly rebooted Heroes. The four remaining Heroes are on the lam from the law and trying to keep a low profile: by starting murderous bar brawls.

Because they're comic characters, they all have clear visual traits (like specific haircuts, HH t-shirts and even in one case a HH tattoo on the side of the head) which makes any attempt to blend in superfluous. The other built-in story problem is that they don't actually play aeroball anymore, so excuses to use bulky jet packs (which they're magically wearing hidden under their clothes whenever the plot requires it) have to be shoe-horned in.

Plot: the Heroes are forced to stop a drug gang who are pushing an economically terrible product that makes the user get really high just before their brain explodes. In a shock twist, the bad guy is Artie Gruber (from the prequel series Inferno).

This is it for the second generation Heroes. I think the next future sport story to get tried is maybe that one with the guy with the head of an ass ... Second City Blues (2006)? Although: the denouement has Artie Gruber's mind in an escape pod, so there's time for a sequel yet. Tharg? Hello?

Brigand Doom: Account Yorga-Vampire
Stretching the credulity of allegorical storytelling to breaking point and then beating us over the head with the remains, this has vampire accountants both drinking the blood of their victims and then magically absorbing metaphorical but also literal value from their bank cards. Brigand Doom turns out to be a friend of the economic system and so joins forces with Investigator Nine to foil the fiendish financiers. (I'm guessing this is at least partly inspired by the Count from Sesame Street.)
More a concept than a character, and having been with us since 1991, this marks the last of the zombie freedom fighter's malodorous musings.

Strontium Dogs
The Alphabet Man sets up that the previous couple of odd villains (bald professors with letters tattooed on their foreheads) are actually part of a twenty-six strong gang who (for no apparent reason) have it in for Feral and the Gronk. They kidnap and then decide to murder the goblins from The Final Solution. This high concept leads us to High Moon, which is an eight-part sequence that brings in Bullmoose Jackson, Feral, the Gronk (as Rambo), Frinton Fuzz, Middenface McNulty and Durham Red. All of this just seems to be set-up, though, because the antagonists and the protagonists don't get to dance (as the professors never turn up in High Moon).
Perhaps the pay-off comes in prog 957's one-off, but otherwise we've got to wait till a final series starting next year in prog 993...

Mambo: Fleshworld
As it's been almost a year since the first book, this opens with a recap. The hero is a cyborg-ish cop (Rachel Verlaine) who's just discovered that she's also got an alien parasite in her head that gives her the power of mad, spikey, retractable tentacles. It's a body horror space opera, where she's some kind of chosen one on a squishy cyber-organic planet that's trying to find itself. This joins the likes of Fr1day's Apocalypse Dreadnought and Blackhawk in leaving the hero floating magically in a space bubble because there's nowhere else to put them at the end.
There's more Mambo next year starting in prog 1014...

The Grudge-Father: Skin Games
The titular G-F is an insane, megalomaniacal religious zealot in a skin mask. He's on a mission to stop some ugly bastich from doing even more evil and so body-swaps (and head-floats) his way out of trouble like an invincible idea (as opposed to a character in a story).
The Grudge-Father retires here.

Tracer: High-Wire Days
After a one-off six pager in the 1993 Winter Special, we get this two-parter where a grumpy, wise-cracking fixer in goggles and a bandana rescues people for money.
And that's it for this thrill, as Tharg clearly decided to ... skip Tracer.

It's all media tie-ins, these days...