Hope...for the future! Hope...under fire! It is a dark time for the Rebellion ... no, wait - this is still Egmont publishing the comic here.

I think this is around where Tharg shedded from Burton to McKenzie. It gets brought up quite a lot in other discussions that an outgoing Tharg leaves their *best* submissions in the drawer as a gift to the newcomer. A way of easing them into the weekly grind of the Galaxy's Greatest's never-ending, insatiable hunger for thrills.

We can only imagine the enormous HUZZAH that must have lifted Tharg's spirits as out spilled... 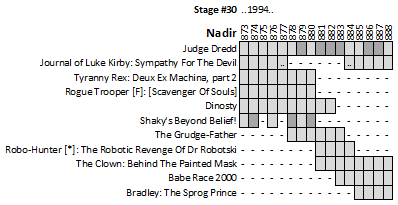 Mind you, sarcasm aside, the 873 jump-on, on paper, looks really strong: Dredd, Rogue, Tyranny, Kirby and a new thrill - Dinosty - from Mills.


Sweet baby Jovus, I got out at the right time. The latter part of this stage I've only partially read through horrified fingers. How did the Prog survive this? How?

Meanwhile, in Megazine-land, Anderson is backpacking around the galaxy in Postcards from the Edge.

Judge Dredd
Alan McKenzie, John Tomlinson, Mark Millar & John Higgins take turns scripting Dredd. The Sugar Beat takes Dredd to the Pan Andes Conurb and some racially-charged depictions of the locals. It's all a little bit Jeremy Clarkson. The Manchu Candidate provides another piece of set-up for a mooted confrontation with Sino-Cit and in that way plays a bit like Pirates of the Black Atlantic. The Enemy Below was memorable for the Clint Langley art.
Wagner's back in the next stage...

The Journal of Luke Kirby: Sympathy For The Devil
Luke's dad is stuck in hell and needs Luke to help him out. No pressure, then. (Disturbingly, women are relegated here to non-magic, top-totty duties as the narration tells us "women are no good at magic. But there was one kind of magic they excelled at". Oh dear. How parochial.) Previous parts of the tale have stuck with folkloric myth, to some extent, but here Santa Satan himself takes centre stage, and what was smoke and mirrors becomes set in stone and ergo less believable.
Returns for a new series in 1995...

Tyranny Rex: Deux Ex Machina, part 2
The first part was set in a sci-fi nunnery under seige by bio-mechanical mercs. Now, Tyranny gets teleported to a city policed by floating robo-Elvis heads that only communicate using his lyrics. And she has a magic spirit-ball companion. And then madder stuff happens. I *think* it ends with the rebirth of humanity, with Tyranny as god. And there are songs, so it may qualify as a musical.
You have to wait ten years for a follow-up...

Rogue Trooper [Fr1day]: [Scavenger Of Souls] *RETCON OF A REBOOT*
Friday is now on an un-named, war-torn planet (having arrived here using unknown means from the end of Apocalypse Dreadnought, where he was floating in a bubble in space). He finds a chatty alien biochip that says he can take him to the Scavenger of Souls - an alien who, erm, scavenges souls. And stores them in biochips.

All of this is engineered as an excuse to rectify the problem of this Rogue Trooper not having biochips, by retconning them into existence on the Scavenger's spaceship as Top, Lucky & Eightball (the equivalents of Helm, Bagman & Gunnar). And Clavel/Clavell gets resurrected using exposition. Luckily, for no reason other than plot expedience, Friday happens to have slots on his equipment for a technology that didn't exist narratively until right now.

Chris Weston's of course an amazing artist, but he has a tendency to draw Rogue in this series grimacing as if he's constipated while he's saying things like "there has to be a way", "rrrr", "aaaaa" & "fight hard!". Get that trooper some castor oil, quick!


I do love Chris Weston's commitment to a permanently super-tense Friday. The character kind of only works as a coiled beast on the edge of exploding into shooty-death outbursts. With those popping veins and spittle-flecked teeth you can practically hear that his brain has an unending drone of 'OBEY ORDERS. FIGHT HARD. DIE WELL.' giving him a constant migraine. Also it makes it easier not to read the words.

Having neatly fixed everything, Fleisher bows out now and the next series (next stage) has Steve White at the helm (ha!) of Retcon Rogue...

Dinosty *NEW THRILL*
Starting out as part of the opening line-up for the mooted Earthside 8 comic, this ended up being published here. Anthropomorphic dinosaur royalty have dominion over humans, which they treat as cattle. It's Planet of the Apes meets The Windsors by way of Jurassic Park.
Tis a one and done: although oddly there's a Star Scan in prog 1030.

Shaky's Beyond Belief *NEW CULTURAL ARTEFACT*
Aburdist pop art & commentary. For example, there's a monk carrying a cactus, and it says "Thai monks must carry a cactus plant at all times - as a sign of humidity!"
More in 1996, as it takes a while to get this high...

The Grudge-Father *NEW THRILL*
Uhm...a weird guy in a skin mask goes hunting for a monster that turns out to be the embodiment of hatred. There's a character called Prettymouth, and cats on laps feature predominantly. It's like ... James Bond crossed with a sewage processing facility (and that's me trying my absolute best to be fair and balanced).
Before anyone could stop them, they made a sequel, which gets published in 1995...

Sam-Slade: Robo-Hunter(*) - The Robotic Revenge Of Dr Robotski [*REBOOT of a REBOOT]
Here's what I wrote in stage #25: "it's a Millar script so the unstoppable, invincible, muscle-bound, heartless, murderous foe will get destroyed somehow on the second to last page (after a bunch of stuff gets ruined)". It holds true here.
Hogan & Hughes are back in the driving seat (well, one of them should probably sit in the passenger seat otherwise that'll be awkward) for Metrobolis, starting in prog 904...

The Clown: Behind The Painted Mask
A psychotic clown who talks to his deceased pony is being hunted by a police detective. This is complicated by both an alien invasion and a zombie outbreak. Which made me think of this.
This is the last we see of The Clown.

Babe Race 2000 *NEW THRILL*
The title is its own satire. Like, this is Death Race 2000 but they replaced all the drivers with heavily-armed strip club babes. WAY worse than Space Girls. And if you imagine that at least it sounds titillating, it's not that either. It even steals from Viz's Millie Tant by using the threadbare reasoning that anyone that complains about the sexualization of women is a fat, ugly lesbian. Needlessly offensive claptrap.
Despite the sky being blue and bears shitting in the woods, this actually gets another brief shot at stardom in the next Yearbook...

Bradley: The Sprog Prince
Bradley's back to being depicted in an alien world (despite years on Earth), and the plot is sort of The Prince and the Pauper.
More Bradley next stage...