At this point we could say the comic was still up and swinging punches, but signs of fatigue were showing. A lot of new thrills are tried, but few are landing well. There's still a problem with re-hashing old characters or even just series titles but without the form or chutzpah of the originals.

It's far from being a terrible comic: there's great art and interesting themes. But, compared with earlier years, the thrill-thread that we follow through the comic is thinner. (Sometimes gossamer thin).

The Megazine continues it's fortnightly second volume with the classic comedy Return of the Taxidermist. 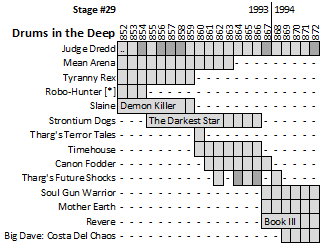 Judge Dredd
The main issue with the Dredd of this era in the prog is that it's being written by folk (Morrison & Millar) who, by their own (later) admission, don't know well or enjoy the milieu. (We can exempt John Smith, who, in this section, provides us with the 3-prog Roadkill: although it's a bit on the obnoxious side.)

Morrison: "I was aware of Judge Dredd but it just seemed like a load of old toss". Quite why anyone thought it was a good idea to give their signature strip to people who regarded it as pish is ... a question. I suppose part of the answer must be the nurturing of talent, but it seems careless.

Some of the results of that decision are the final two episodes of Inferno (nonsensical and perverted), then War Games (some foreshadowing that I don't remember paying off), Judge Tyrannosaur (does what it says on the tin), Book Of The Dead (well-rendered Egyptian-set thrill about a death cult - featuring conveyer belts), I Hate Christmas (Ezquerra!), Frankenstein Division (Sov Cyborg monster that can't be stopped gets stopped by Dredd's fists) & Crime Prevention (sort of Minority Report in four pages).

In the next stage five different writers try their hands at Dredd...

Mean Arena *NEW THRILL*
So, The Mean Arena ended in prog 282, and was good (but became less good over its run). This is not that - not a reboot or a retcon: just a brand new story that uses the same name. This is more like Gladiators (the tele show) crossed with that spikey platform from Flash Gordon, but not as exciting as either of them (together or alone).
Tis one and done.

Tyranny Rex: Deux Ex Machina, part 1
Tyranny Rex is a nun seeking redemption, but she's a nun with attitude (and guns)! When the cousins of the baddies from Firekind show up, she's all that stands between the congregation and gruesome annihilation.
Part 2 next stage...

Sam-Slade: Robo-Hunter(*) - Winnegan's Fake [*REBOOT of a REBOOT]
Peter Hogan comes on board as writer to replace Mark Millar, and suddenly Hoagy and Stogie are back in the frame. The art design gets a Rian Hughes makeover and now looks like we've landed with The Jetsons. So: not as aggressively offensive as the first reboot, but still not feeling much like the original.
It's back to Millar's version in the next phase, so good luck with any sort of continuity for the character...

Slaine: Demon Killer
The time-traveling nature of Slaine's world has been there really from the first episode where he fights a dinosaur. The Time Tunnel aspect of his personal adventures was first brought to the fore in the 1985 Annual's Battle of Clontarf, which is retold in the first episode here to set the scene.

With Slaine's reign as high king over, he is to be sacrificed: but Danu has other ideas and instead sends him on the first of the Quantum Salmon Leap adventures that make up this stage of the wider saga. First up, then, and gloriously depicted by Glenn Fabry, we visit Roman Britain to tackle rent-a-villain Elfric (again).

After a rather sudden conclusion, this returns in prog 889...

Strontium Dogs: The Darkest Star
Feral and the Gronk (who's now a hard-drinking Rambo-type) decide to seek revenge against the Lyrans who murdered Johnny Alpha. Great art from Nigel Dobbyn lifts this above a thinly-stretched road trip. It's a bit like Falconhoof meets Orko.
More Dogs in prog 897...

Timehouse *NEW THRILL*
A collection of folk live in a magical house that can exist in any time and place. [Hello, Survival Geeks!] The problem is that everything's a bit staid: it's like Indigo Prime through a Tintin lens. Zany things happen (although that's zany like Swap Shop, not zany like Tiswas) but there's no overarching plot.
Returns for second series in prog 919...

Canon Fodder *NEW THRILL*
This has a religious enforcer (the titular Canon Fodder) investigating the double suicide of lovers Holmes and Moriarty, who have killed themselves in order that they can visit heaven and murder God. So, y'know, not a boring story. Art by Weston, and a similar plot structure, make this easily comparable to Killing Time and it's no doubt worth the admission price just for his depiction of God.
A second series with a different writer comes along in prog 980...

Soul Gun Warrior *NEW THRILL*
Serious Marmite based on your love for Shaky Kane's art style. The soul gun uses as bullets the souls of pilots who have to commit suicide. So, the ghost of a US operative fights the ghost of Uri Gagarin, who is sabotaging space shuttles. Rocky IV meets pop art pulp sci-fi.
Soul Gun Assassin targets us in prog 920...

Mother Earth *NEW THRILL*
A weird, eco-warrior, wish-fulfilment fantasy in which a heavily-armed, time-traveling future human tries to save the planet by murdering corporate CEOs in cruel and inventive ways. For no credible reason, she requires some random civilians to be forced to help her: so this is like Scooby Doo meets Captain Planet.
Tis a one and done.

Revere: Book III
In some crazy world of future myth, Revere, the Witch-Boy of London, has leapt to his death but been transported to a spirit world, which eventually leads to some sort of cosmic rapture.
Wow. That was trippy. Revere returns as part of the Smithverse in 2017...

Big Dave: Costa Del Chaos
Not realizing this could get any worse, this time it's in colour! Does what it says on the tin, really: Dave goes abroad and is horribly violent. In a sort of rip-off of Harry Enfield's mirror character to Loadsamoney (Buggerallmoney), there's a counter-character by the name of Ballser that's inserted to create a "plot".
The apptly titled "Wotta Lotta Balls" crops up in prog 904...