This is the first time I recall the prog positioning itself with a seasonal jump-on: in this case the much-hyped Spring Fever, with a launch of two new series, a key new thrill, two postcards, some stickers and a Judge Dredd pencil.

Meanwhile, over in the Megazine, Anderson travels to Mars in the lauded Childhood's End. 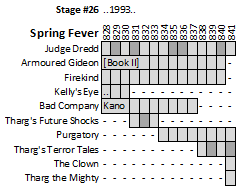 Judge Dredd
You may remember such classics as ... erm ... Hottie House Siege over in the Megazine? Cos the prog just gets some light froth from Ennis and Millar. There's the introduction of Jonni Kiss, which has the Gila Munja in it (except they get easily defeated by Nick Kamen from the Levi's laundrette commercial). And Muzak Killer is a bit of a (dated) curio featuring the author's clear frustration with the existence of Terry Christian.
Next up: the infamous Inferno...

Armoured Gideon [Book II]
Frank Weitz is on a mission to switch (back) on Armoured Gideon and so save the earth from a demonic tsunami. A tricky second album.
With everything wrapped up neatly here, we get another series in 1994...

Firekind
Whenever anyone derides this particular era of 2000 AD, someone always brings up Firekind - because it's amazing! If someone describes James Cameron's Avatar to you, they might as well also be describing Firekind, as each has dragons, floating rocks, an alien culture, a group of exploitative humans and one particular human who could just (just) make a difference. The key thing to remember is that Firekind is great, and Avatar's just good, and mostly the difference is that the former seems unique whereas the latter falls too readily into cliche.
Quits whilst it's ahead with just the one perfectly formed (especially when it's published in the correct order) series. If you are reading the progs (and not eXtreme Edition #8) and want to avoid the hiccup then after part #6 in prog 833, you should read part #7 in prog 840, then part #8 (which is labeled as #7) in prog 834. Then simply follow the now incorrectly numbered sequence to the finale in prog 839. Easy.

Kelly's Eye: Armed Response
Invincible man kills men who keep shooting at him for some reason (even though they know he's invincible). Some structured dialogue could surely have solved these problems before it came to this.
It's over. You can come home now.

Bad Company: Kano
Kano is a farmer, but people from his hamlet are going missing in the jungle, and his dead war comrades have come to visit. This rather marks the point where Bad Company stopped being a straight narrative and entered a subtler realm where you can't really trust sequential logic.
More oddness featuring characters dressed up like the ones in Bad Company in 2001...

Purgatory
People say: "...but I like the Ezquerra art." Quite an interesting premise (a riot on the Justice Department penal colony of Titan) is lost beneath a heaving, grunting pile of illogical rage as ex-Judge Grice gets angrier than a barrel full of bees rolling down a mountain and proves it by burning his own hand off in lava, but not feeling the pain! One of the key problems with a story like this is that it features a complete bastard who you wouldn't want to know fighting other complete bastards that you wouldn't want to know. Is this cool?
Continues under the Judge Dredd banner next stage as Inferno...

Tharg's Terror Tales
First Tharg shocked us with the Future. Ro-Jaws briefly shoved his way in to focus on robots but Tharg welded his mouth shut before twisting time, telling tales of dragons and finally going beyond even science. The only thing missing? TERROR!
Terror Tales continue to be one of the many options available to The Mighty One...